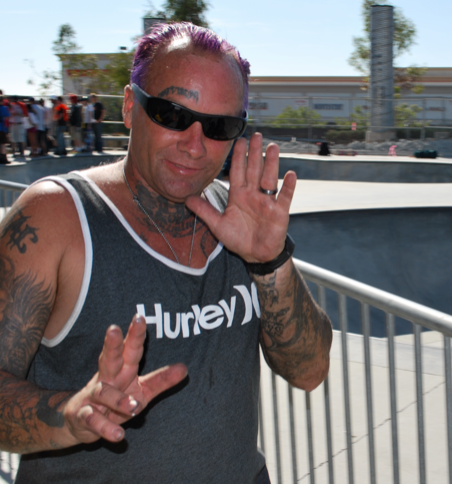 I had known about Jay since I was in my early youth ten or eleven watched Tony and Jay rip a pool on Bundy under this carport thing. We ran that place ragged for months, I was 12. I remember the other kids asking all to back off as Tony and Jay commenced to shred that pool. This happened on more than one occasion. I had a chance to interview him for the Makaha 25th Anniversary Contest in 1989. A whole video interview and it was pretty rad to watch that recently and see where his head was at in 1989. Pretty together I’d say from my perspective on his vibe. Then more recently about 4 years back I asked Jay if he’d like a Makaha Shirt. We were at Agenda in Long Beach Ca. And yep his face lit up he grabbed one then asked for two more. That and the picture I took of Jay were the last two times I had the chance to see him in person. I did not know him well but felt a kinship to him that I think a lot of us did. He was taken way too early.